On clash, shock and other effects of cultural intermingling.

In ‘Sapiens’, the 2014 bestseller on the history of our human species, historian Yuval Noah Harari defines culture as follows:

“Myths and fictions [that allowed people] to think in certain ways, to behave in accordance with certain standards, to want certain things, and to observe certain rules.”

In essence, Harari says, culture is a network of artificial instincts that enable humans to cooperate and stay dominant.

It may be based on stories we have made up but culture is important to our species. However, as a word used widely to describe the many ways that we band together, it is often hard to pin down.

Some cultures are a natural result of geographical borders. Countries and their people are typically bound by language, food and celebrations, among other things. Even in a country as regionally diverse as India, it is possible to come together for activities of undisputed importance such as cricket. There are strong cultures that flourish inside workplaces or institutions. Others are more behaviour-based and can be positive or subversive in nature, e.g. a culture of biking in a city or of drinking on a college campus.

When two established cultures come in contact with one another, the effects of the encounter provide material for both sociologists and movie makers. In the movies, one common culture clash scenario revolves around forbidden love. Maybe it is some evolutionary instinct for preserving genetic lines but when a young person attempts to marry outside their cultural milieu, push back from the family is often strong and swift.

Way back in 1981, Ek duuje ke liye’s portrayal of a doomed love affair showed us that in India, North is North and South is South and when the two do meet, it doesn’t always end well.

In 2014, Two States handled a similar theme (this time through a relationship between a Tamil girl and a Punjabi boy) but with doses of humor and a more sunny worldview. The fact that the theme was still relevant more than three decades after the first movie speaks to the stubbornness of cultural barriers. But parental opposition was weaker in the modern tale and not viewed as insurmountable, indicating that we have made progress on this front.

In the 2015 Hollywood movie, Brooklyn, we see a softer juxtaposition of cultures in Italian American Tony’s courtship of Ellis, a native of Ireland and a recent immigrant to the city. Set in the 1950s, the romance between the two blossoms on neutral ground but amid some clear cultural differences. One lighthearted but sweet scene shows her going over to meet his family for the first time. They are warm and friendly but serve her an Italian dish that is completely unfamiliar to her: spaghetti. As she studies and weighs the best way to tackle it, we are reminded of a time before dishes like spaghetti became global cultural exports and when there were no easy channels for cuisines to spread.

There are other movies that also handle the theme of cultural conflict with sensitivity. In Gran Torino, Clint Eastwood plays a crabby Korean War veteran living in a predominantly Southeast Asian neighborhood of Detroit where gang violence has become the norm. He carries a lot of baggage from his past that colors his views on immigrants in his section of town. However, through an unlikely friendship with the young Asian man living next door, he finds a way to move past his prejudices.

When there are two or more cultural groups attempting to co-exist in an area, such clashes may arise and resolve over time. But for the lone individual who transitions into a new culture – whether of a place or group – there can be a real if temporary sense of disorientation. The culture shock effect wanes as an individual adapts to the new environment, modifying values and customs in the attempt to assimilate. For later groups of migrants, however, the landing is likely to be softer. These days, wherever Indians move to in the world, they can find a recreated version of home involving community, activities and food to ensure that they never feel homesick or out of place.

Food, the ultimate barrier in cultural assimilation, can also serve as a big unifier of cultures. If spaghetti was alien to Ellis in 1950s Brooklyn, it has now become very recognizable fare in most parts of the world. Various ethnic influences on American cuisine have transformed it from its blander origins. Now you can have anything from banh mi to falafel to samosas on the streets of many American cities. In a country like India, food is also a geographical marker of sorts. You know you have crossed over from Tamil Nadu into Karnataka when ragi mudde shows up on the menus of roadside joints. But it is also an interesting exercise to map the mix of ingredients and cooking styles used across the country. What we’ll find is that while each state has a distinct cuisine, the influence of neighboring states is unmistakable, especially along the edges.

When cultures collide, the fallout can be violent or unpleasant. But, as these cinematic and real-life examples show us, it can also be beautiful and eye-opening. Not to mention delicious.

Alterpoint is a column that appears in Viewpoint, a quarterly published by The PRactice. It looks at connections between life and the arts.
Advertisement 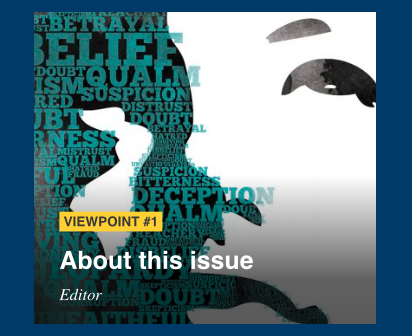